Eurasian Water Milfoil and Curly Leaf Pondweed have been found in Lake John  since 2012 and zebra mussels where found in the lake in 2015.  Historically, a majority of the Lake Association budget has gone to combat these invasive species but in 2020-21, with the association with have support from the LID. 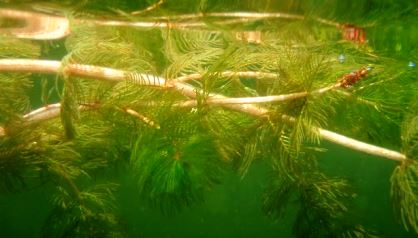 Eurasian water milfoil (Myriophyllum spicatum) is a feathery underwater foliage that was introduced to the eastern United States at least as long ago as the 1940s, but it may have arrived as early as the late 1800s. Milfoil can drastically alter a water body’s ecology as it forms very dense mats of vegetation on the surface of the water and can shade out the native vegetation which ultimately, can alter the species composition of the water.  This plant is not a valuable food source for waterfowl and plant biomass can become so dense that predator fish will lose their foraging space and will be less effective at controlling prey species resulting in an imbalanced fish community.  Dense beds of Eurasian water milfoil make recreational activities such as boating, fishing and swimming nearly impossible and can be nursery areas for mosquito larvae.  A lake heavily infested with Eurasian water milfoil will be aesthetically displeasing which results in reduced property values.

Need help identifying Eurasion Water Milfoil and Curly Leaf Pondweed?  We have a chart that can help. 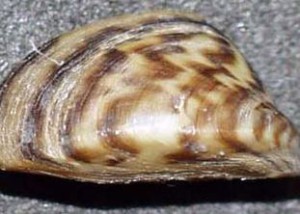 Zebra Mussels were found in Lake John in the fall of 2015 and have also been found in nearby lakes such as Clearwater Lake. Zebra mussels attached themselves to hard surfaces.  During early infestations, zebra mussels are approximately 1/4-1/2 inch long.  You can visually inspect surfaces such as docks, dock floats and supports, swimming platforms, boats, motors, anchors and any objects that has been in the lake for the summer such as trim tabs, rubber gaskets or grooves along the keel of a pontoon boat for zebra mussels. They can also be found on rocks and other hard surfaces along the shoreline and in shallow water, especially near water accesses.

Zebra mussels get their name from the striped pattern of their shells and can grow to a maximum length of about 50 mm (5-10 mm in the first year) and live four to five years. Zebra mussels may disrupt the traditional aquatic food chain if their voracious filter feeding depletes the availability of microscopic organisms that play a critical part in each lake’s ecological food web.

Zebra mussels were confirmed in Lake John in 2015.

There are several different invasive species in Minnesota.  WildlifeForever has a video with footage of many of them.  Watch the video.