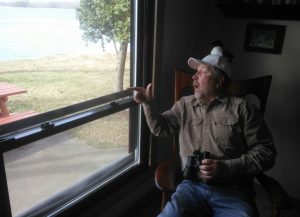 Happy April for my 1st Loon Watcher Report.
In spite of the fact that Lake John has been “open” for several weeks, I have yet to see or hear any loons in the Northern Nursery.  I have seen plenty of ducks, geese, swans and even our resident Bald Eagles (which nest in the Finger).  Last year, our lake was opening about now and the Loons were on site immediately.  I checked with a fellow Loon Watcher on Indian Lake, and she said their Loons usually show up around the middle of April.  In my nearly 30 years on our lake, I have only paid attention to arrival times in very recent years.  I was a little concerned until I was informed yesterday, by a very credible association member, that he heard and saw our State Bird last week.  He resides in the Southern Nursery where there is far more nesting habitat.  High water and strong winds are still move cattail bogs around a lot and some are huge ones.  Anyway that’s it for now from my view on the North End.
Later,
Bruce the Loon Czar