The juvenile loon was spotted on the lake around the middle of August with a large rapala caught on its wing.  The DNR conservation officer was called and Brian came out on August 29th but was unable to find it. Loon reappeared mid-day but the lure was not spotted on his wing at that time.  However, no one spotted the loon able to dive either.  Labor Day weekend, I received emails from members that the loon was in front of their place.  The conservation officer gave me 2 phone numbers to contact volunteers at the Raptor Center.  After talking to them, they said we could try and net the poor thing which we did.  The loon was very weak and never resisted.  We put it in a box and Terry from the Raptor Center came out late Saturday of Labor Day weekend and picked it up.  She called me back on the 8th that it had to be euthanized because the left wing was dislocated and fractured to a point of being unable to fix.

The another juvenile was reported alive and well near the middle of Lake John the week of September 11, 2016.  No adults have been observed in the recent weeks.  I inquired to people around the area and heard reports that is possible that “grouping” may have happened on Pleasant Lake, but many lakes did experience early loon evacuation in the Fall of 2016. 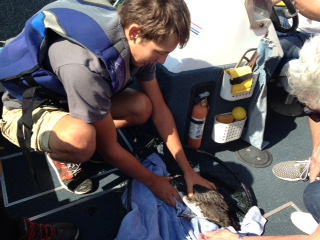 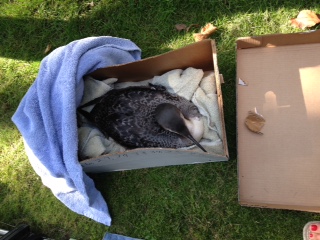